As part of our mission to reduce deaths and injuries at highway-rail grade crossings and around tracks and trains, Operation Lifesaver, Inc. offers rail safety tips for drivers, pedestrians, and an array of audiences. 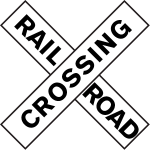 Get to know these railroad signs and signals to stay safe when driving or walking near railroad crossings.